A masterpiece of Gothic architecture, is the very symbol of Venice

The Royal Palace, the neoclassical rooms and Antonio Canova, the History of Venice and the Picture-gallery

Among precious historical furnishings, it houses important works of the XVIII century Venice

Housed in Murano, the museum hosts the most extensive historical collection of Murano glasses

Museum of Textiles and Costumes with the itineraries dedicated to perfume

Housed in Burano, the museum exhibits rare and valuable specimens of Venetian lace, from the 16th to the 20th century

It’s the house where Carlo Goldoni was born and It contains a small museum dedicated to him, and a library of theatrical studies

For over 500 years it has marked the life, the history and the continual passage of time of Venice

THE RESTAURATION of Giacomo Manzù’s Cardinal 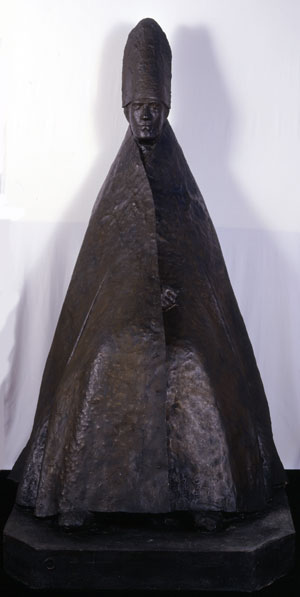 Located in the entrance hall, at the base of the museum’s staircase, Giacomo Manzù’s bronze Cardinal was partially restored after it was submerged by the acqua granda, the extraordinarily high tide that flooded the city on November 12th, 2019. Because of its location the monumental sculpture was the museum’s only art to suffer any damage. As renovations sponsored by Targa Telematics began on the ground floor, the sculpture was raised, cleaned and restored on site by venetian company Co.New Tech.

Work on Giacomo Manzù’s bronze begun by sampling and examining the sculpture with the aid of fluorescent analysis and X rays. Oxidation and corrosion phenomena were detected; deposits of sand, silt, and clay were identified on the surface that was submerged by water; and saline efflorescence was discovered on the rest of the surface. The repairs began at the end of February 2020, were suspended for approximately two months during the SARS-CoV-2 pandemic, and resumed in May. The renovation process on Manzù’s Cardinal was concluded at the end of August 2020.

Manzù started dedicating himself to the cardinal theme in the mid Thirties, struck by a visit to Saint Peter’s Basilica in the Vatican. In 1939 at the third Quadrennial in Rome, Giacomo Manzù presented his first version of the subject, which was then revisited in later works and then displayed in his personal exhibition at the 1948 Biennial, and in the 1956 Biennial, where he unveiled fourteen bronze sculptures, among which two versions of the Cardinal. In this second occasion, the International Gallery of Modern Art’s acquisitions Commission for the venetian exposition decided to purchase the 1955 piece on show today at Ca’ Pesaro. The sculpture’s base is marked by the MAF artistic foundry in Milan, Italy.

Whit the contribution of