A masterpiece of Gothic architecture, is the very symbol of Venice

The Royal Palace, the neoclassical rooms and Antonio Canova, the History of Venice and the Picture-gallery

Among precious historical furnishings, it houses important works of the XVIII century Venice

Housed in Murano, the museum hosts the most extensive historical collection of Murano glasses

Museum of Textiles and Costumes with the itineraries dedicated to perfume

Housed in Burano, the museum exhibits rare and valuable specimens of Venetian lace, from the 16th to the 20th century

It’s the house where Carlo Goldoni was born and It contains a small museum dedicated to him, and a library of theatrical studies

For over 500 years it has marked the life, the history and the continual passage of time of Venice

The Poem of Old Age

«[…] I decided to get back to Pio Trivulzio in Milan, and paint there the old women at table, and other things I noticed then, in particular the sun effect on the while walls, the scrawny and skinny people, and with my eyes see the differences in my method of painting after five or more years.»

After 115 years, the pictorial cycle Il poema della vecchiaia gets back to Venice.
At mid-December 1902, Angelo Morbelli wrote to Biennale General Secretary Antonio Fradeletto asking for the possibility to show 6 o 8 paintings, knowing that his request contrasted with the exhibition regulation, according to which each artist could show only two artworks. His request was accepted and the six paintings composing Il poema della vecchiaia were exhibited at 1903 Venice Biennale. The cycle was held in Sala Lombarda, one of the seven “Regional Shows”, and was located on the wall according to two horizontal lines: in the middle, both above and below, the larger canvases; on their side, the four works characterised by a stilted perspective breakthrough.

The Poem deals with the theme of old age, a subject already hinted at by the artist as from the first 1880s, when he depicted the Albergo dei Poveri, the greatest rest home for the poor and elderly in the city, established in the palace of prince Antonio Tolomeo Trivulzio in 1766.

From that first exhibition during the 1903 Biennale, various collecting vicissitudes prevented to exhibit the whole Poem in its wholeness. As Vecchie calzette (Old Socks), the only canvas of the cycle disappeared since the first years of the 20th century, has recently got back to Europe from south America, the whole painting cycle could be joined together. Recent and accurate researches have allowed to repropose on this occasion the original staging of the cycle thought and wanted by Morbelli. The choice of housing the whole cycle at Ca’ Pesaro, since 1903 holding one of the six canvases, Il Natale dei rimasti (The Christmas of Those Left Behind) makes the event ever more meaningful.

In the working space in which Trivulzio’s patients used to perform minimal activities, a ray of sunlight illuminates the rows of benches. The vast room is almost empty, except for the presence of five figures, desolately isolated in their melancholy, illuminated by light or swallowed in the dim light.
Il Natale dei rimasti was purchased by the City of Venice for Ca’ Pesaro. In 1905 the painting participated in the International Exhibition in Munich along with two other works from the Poema: I due inverni and Vecchie calzette. 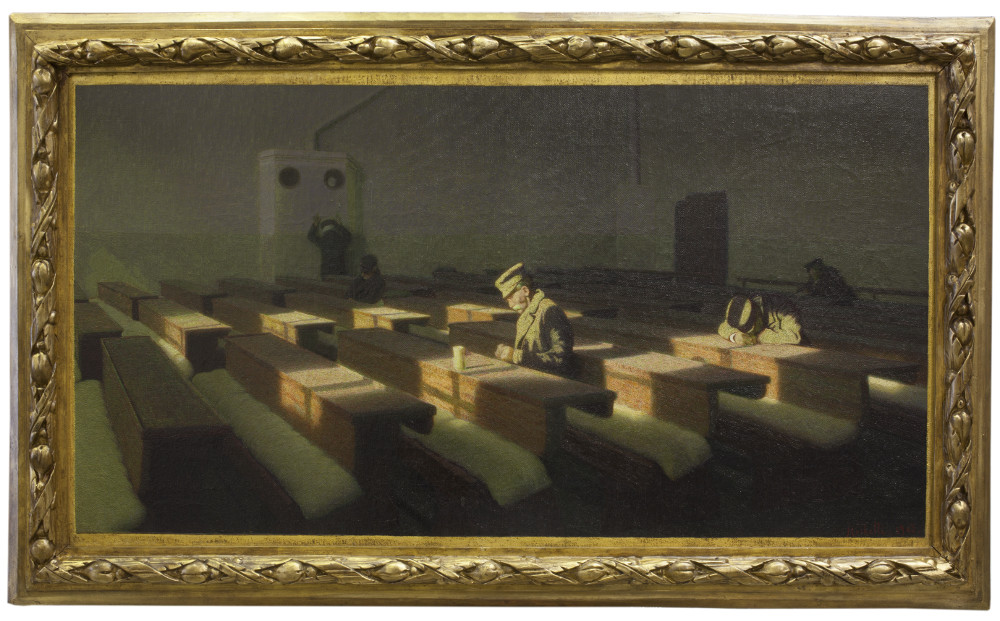 In the original first version of the painting, the head of a coachman leading a hearse was visible beyond the glass. As in Sedia vuota, the artist eliminated this iconographic detail. Exhibited in Munich in 1905, Vecchie calzette was awarded with a gold medal. The following year, sent to the 76th Esposizione Internazionale di Belle Arti della Società Amatori e Cultori in Rome, it was bought by Félix Buxareo Oribe, a wealthy landowner residing in Montevideo. 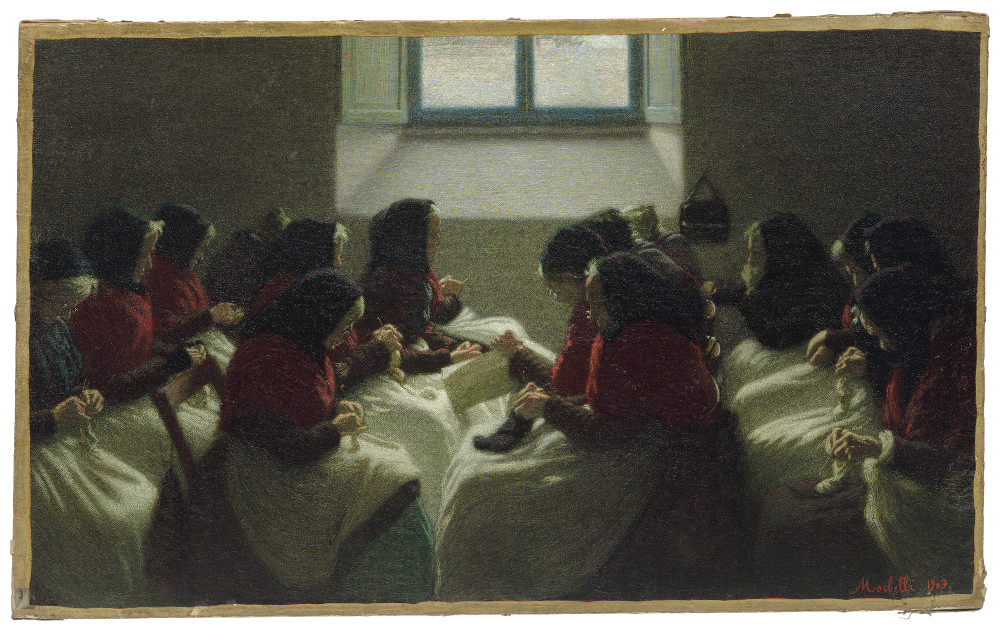 At Trivulzio, meals are taken in two large halls, once the palace’s stables. The uniformity of the figures on the bottom contrasts with the individuality of older women in the foreground. Morbelli lingers on rendering their features and the details of the set table, the white tablecloths, the pile of bowls, the ruby reflections of wine that recall the women’s red shawls. Thanks to Fradeletto’s interest, the painting entered the collection of Gaspare Gussoni, an industrialist and Lombard collector, as well as a Member of Italian Parliament. 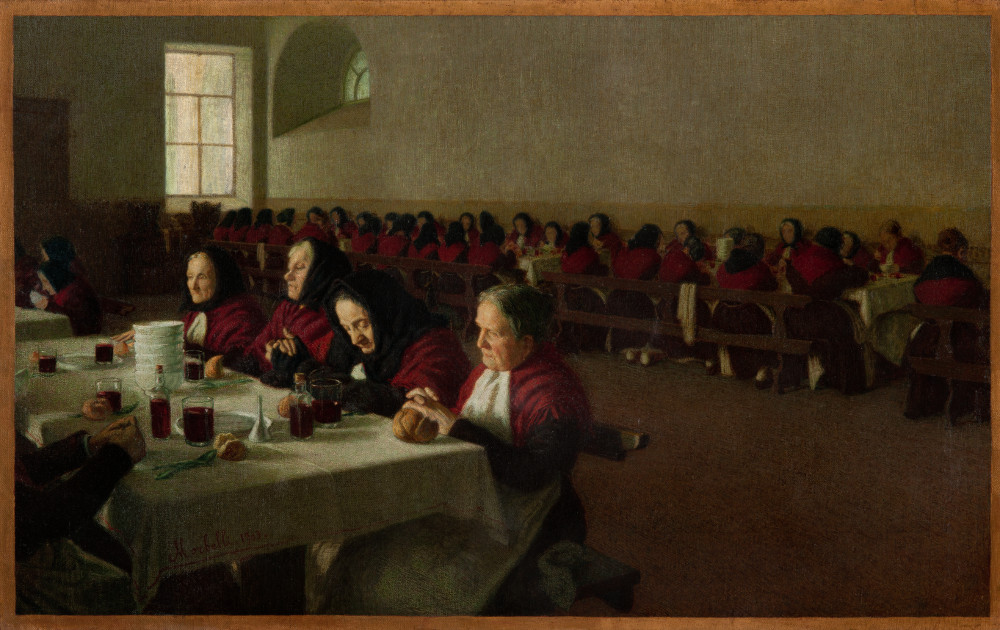 A faint luminosity coming from the outside brightens the room, is refracted on the glass bottle placed on the windowsill, caresses the white-haired heads wrapped in heavy shawls, shines on the hands busy mending and on the figures’ profiles. The cold reverberations of the whitewashed garden and the ochre reflections of the outer wall enhance the dark tones of the Trivulzio room from which the figures of the patients emerge against the light. 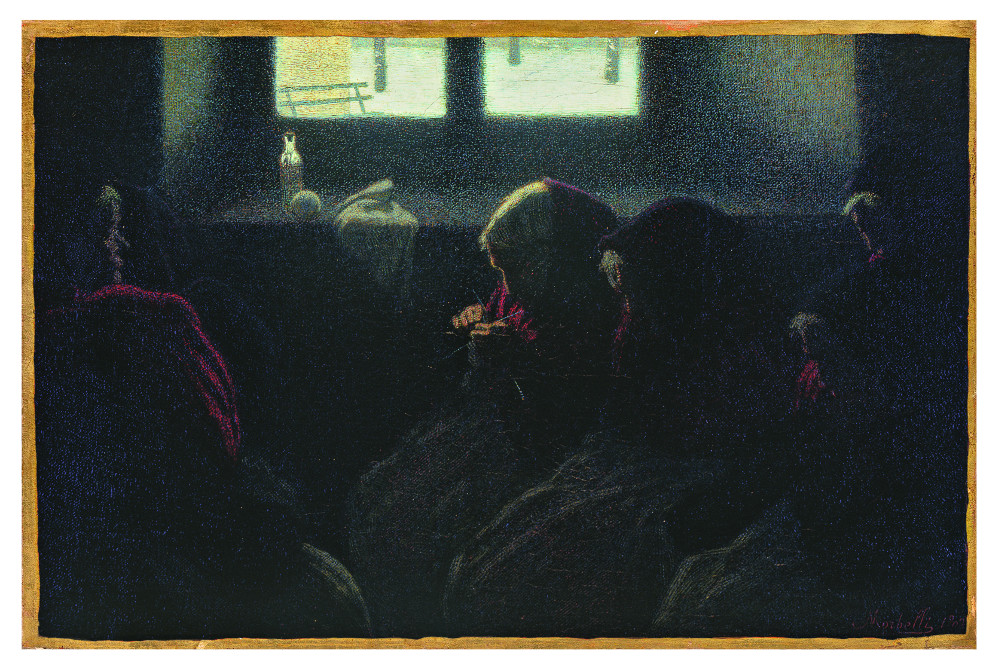 A group of guests are working gathered under a high window. The apparent tranquillity of the scene contrasts with the presence of an empty chair and the resigned attitude of the bystanders. In the first draft of the work, the life-death dialectic was emphasized by the presence of the viaticum umbrella outline. The artist then cancelled the detail of the funeral decoration, fearing that the reference to death could be an obstacle to the sale of the painting. 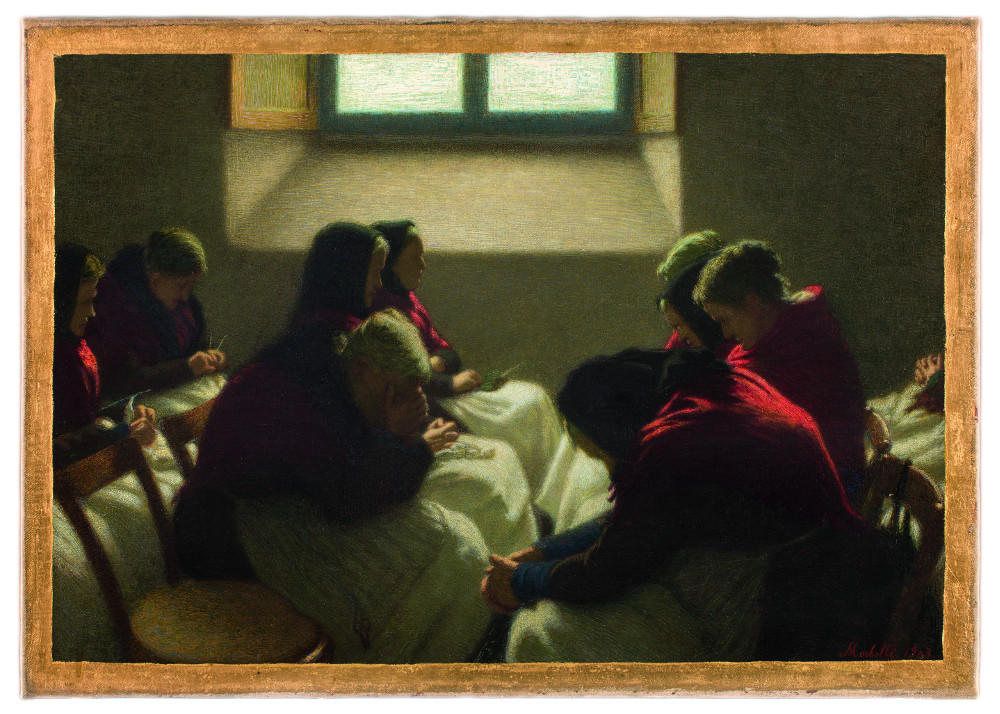 By changing the perspective angle and raising the point of view, the painting proposes the same composition as Sedia vuota. Unsold either in Venice in 1903 or in Rome in 1906, the painting was sent to the exhibition at the Carnegie Institute in Pittsburgh in 1907, but was rejected by the acceptance jury. On 31 December 1914, Morbelli wrote to Carlo Zanzi, director of first-grade and childhood schools in Alessandria, proposing the purchase for the local gallery. In October 1915 the work entered Alessandria civic collections. 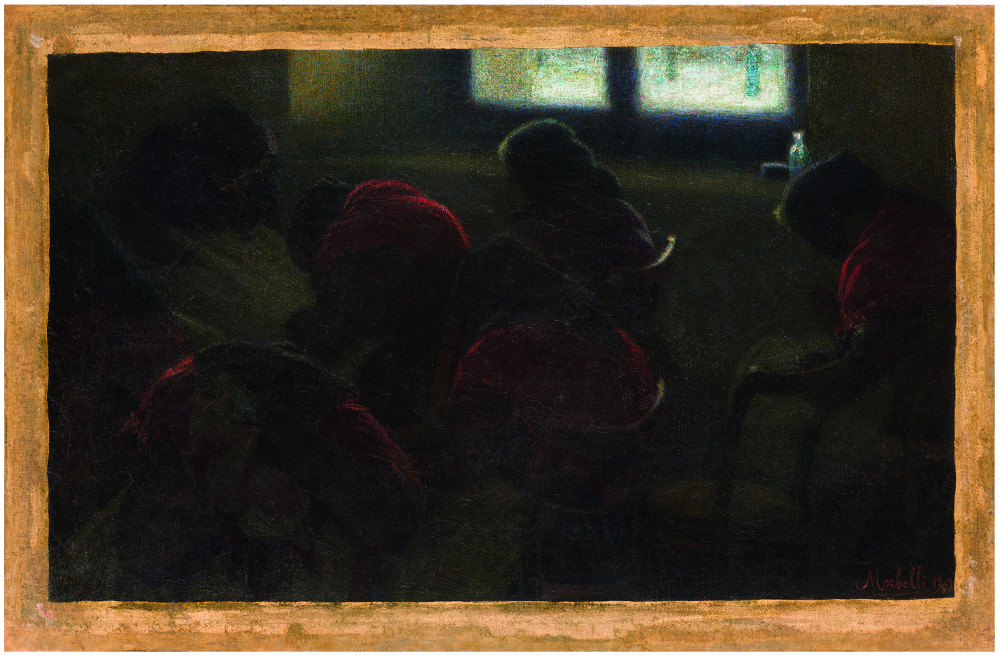